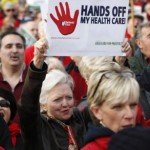 No matter where you stand on the issue of healthcare/health insurance reform, you have to admit that the Obama administration has done a terrible marketing job. Few understand the various plans under discussion. The administration has been forced onto the defensive by aggressive opposition, and their attempts at clarification have largely been useless. It is a little shocking that any president, even one determined to transcend partisan politics, could have gone into such a major initiative so naively, and so ill-prepared. Especially since so many people are already justly suspicious of government, and blown away by the scale of recent financial mismanagement.

There are some good lessons on messaging in this debacle.

A couple of Liberal commentators are put out with their leader for not being able to frame the proposal in simple, clear terms. In a rhetorical letter to the President, Thom Hartman wrote, “‘Medicare for anybody who wants it. Private health insurance for those who don’t. Easy message…”

Next, you might watch a video clip of Ariana Huffington on Countdown, in which she makes the following points (with suitable exasperation):

Finally, you might take a look at a Roger Ebert post on the power of memes, which clearly can work for ill as well as good.

Let us know what you think.